Karbala processions prepare for the holy month of Muharram. 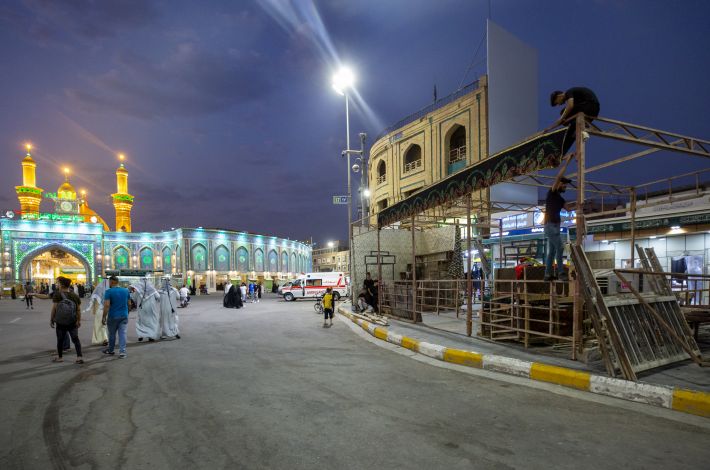 The preparations, as usual, begin after Eid al-Ghadeer, and take an ascending trend until the conclusion of these works on the first day of the sacred month of Muharram. Black banners are hung over all the streets of the city of martyrdom, and many of the processions and Hussayni bodies have booked their sites, and set up their tents, processions, and gathering places.

The head of the Hussayni Rites and Processions Department of the Holy shrines of Imam al-Hussayn and al-Abbas (peace be upon both of them); Haj Riyadh Ni'mah al-Salman, told Al-Kafeel Network: “The people of the Holy City of Karbala began their preparations to receive the holy month of Muharram more than seven days ago, at a high and progressive pace, including security and logistic preparations, in addition to sanitary measures."

He added, "For the second year, we will commemorate the Hussayni mourning in an unstable health environment, with the Corona epidemic and its repercussions that cast a shadow on the situation in general, and on the issue of reviving Hussayni rites in particular, so the preparations for this year were exceptional in this regard."

Al-Salman concluded: “These preparations were preceded by extensive meetings between the owners of the processions, the Karbala’i condolence parties, and representatives of the government security and service departments, which resulted in agreement on many matters that would produce good results, reflecting the value of reviving this sad occasion and highlighting the bright image of Imam al-Hussayn’s renaissance, peace be upon him".