The day of Al-Mobahala is the day of stating the proof of the truthful, whom The Almighty God has ordered to follow in His holy Quran and in its verses. 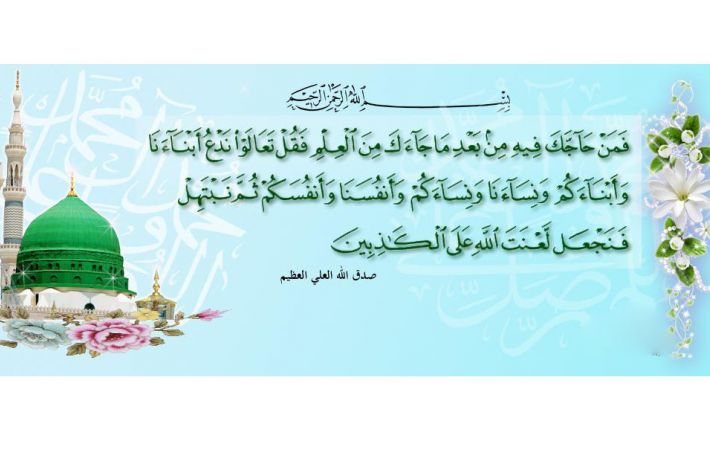 On this day 24th of Dhu Al-Hijjah, we commemorate the anniversary of "the ordeal of execration or imprecation" Mobahalah of the Holy Prophet (prayers and Allah's peace be upon him and his holy Househo...

On this day 24th of Dhu Al-Hijjah, we commemorate the anniversary of "the ordeal of execration or imprecation" Mobahalah of the Holy Prophet (prayers and Allah's peace be upon him and his holy Household) in the tenth day of blessed Prophet's migration with his holy household face to the Christians of Najran. This is a great day in which the Almighty God showed the honourable positions that characterized the People of the prophetic House and their message. It is also a highlighted evidence of the status of the holders of the infallibility and purity, this is what makes it a memorable day and a source of greatness in a series of the historical Islamic days, a momentous day in which the supreme God's word has dominated with the Almighty God to Holy Messenger in his great Book: {Then whoever argues with you about it after [this] knowledge has come to you - say, "Come, let us call our sons and your sons, our women and your women, ourselves and yourselves, then supplicate earnestly [together] and invoke the curse of Allah upon the liars [among us]."} (3:61).

This holy verse, because of containing the phrase /nabtahel/ in its Arabic text, is known in Islamic literature as the verse of 'mutual Cursing', /Mobahalah/ The Arabic term /Mobahalah/ means: to leave the personal tendencies and attracting the attention towards invocation and supplication before Allah for asking curse and perdition unto the one who is not right.

Traditions say that the Prophet of Islam (prayers and Allah's peace be upon him and his holy Household) wrote a letter to Abdul Haris Ibn Alqama, the Grand Bishop of Najran, who was the official representative of the Roman Church in the Hijaz. And invited the people of that area to embrace Islam. The text of the said letter runs as under: "In the name the Lord of Ibrahim, Ishaq and Ya'qub...This is a letter from Mohammad, the Prophet and Messenger of Allah to the Bishop of Najran: I Praise and glorify the Lord of Ibrahim, Ishaq and Ya'qub, and invite you all to worship Allah instead of worshipping His creatures, so that you may come out of the guardianship of the creatures of Allah and take place under the guardianship of Allah Himself. And in case you do not accept my invitation you must (at least) pay Jizya (tribute) to the Islamic Government (in lieu of which it will undertake the protection of your lives and property), failing which you are hereby warned of dangerous consequences.

This news spread rapidly among Najran's people, who got infuriated as well but the Bishop of Najran pacified them and advised them to be mindful of the military might of the Islamic regime and try to find a peaceful solution. After deliberations, it was finally decided to send a mission to Madina and have a dialogue with the Muslims. A 14 member delegation headed by Aqib Saidawar and Abu Harisa started off for Makkah. Abu Harisa was considered as the greatest Bishop and scholar of the Christian world at that time and Aqib Sadawar was the biggest strategist and negotiator of the time.

When the delegation reached Madina, the Apostle preached to them and requested them to accept Islam. They asked, "What is your opinion about Jesus Christ?" The Apostle was awaiting a revelation in this matter, and the next day the verses of the Holy Quran were revealed to him to show the true position of Jesus Christ: {Surely the likeness of Jesus is with Allah as the likeness of Adam; He created him from dust, then said to him 'Be', and he was. (This is) the truth from your Lord, so be not of the disputers.} (3:59-60)

When they appeared before the Holy Prophet, The Holy Prophet recited the above verses before the visiting Christians explaining that Christ was a Prophet like Adam and like Adam, created from dust and therefore could not be the son of God. After this, the Holy Prophet invited them to embrace Islam. And, after exchange of views on several issues, the delegation did not seem to be willing to accept the observations about the incorrect beliefs of Christianity and the logical explanations proving the in-correctness of their beliefs. They remained obstinate and refused to be convinced by anything.

Thereupon the holy verse of Mobahala was revealed. Prophet Mohammed (prayers and Allah's peace be upon him and his holy Household) recited this Ayat and invited them for Mobahala - praying to God to destroy and banish the liars.

Mobahala became necessary since the Christian delegation was adamant to accept the truth. After some hesitations the delegations accepted to have the Mobahala after two days. In their consultations among themselves, the grand Bishop Abu Harisa told his companions that if tomorrow, Prophet Mohammad (prayers and Allah's peace be upon him and his holy Household) brings his companions and his tribesmen and military might with him for Mobahala then they should accept the challenge without fear but if he brings only the members of his family, then never accept the challenge.

The Prophet Mohammad (prayers and Allah's peace be upon him and his holy Household) selected a place close to Madina for the Mobahala which was then cleaned and prepared by Salman Al-Mohammadi (peace be upon him) and the next day the Christian delegation reached the designated place. A number of Mohajereen and Ansaar also gathered at the site.

The holy Prophet (prayers and Allah's peace be upon him and his holy Household) took with him Imam Al-Hussayn in his arms and holding Imam Al-Hassan's hand and Lady Fatima followed by Imam Ali (peace be upon them). The Holy Prophet then directed them to utter "Ameen" when he prayed to God. When the Chief Monk saw them, he exclaimed: "Verily I see a divine light on the face of our combatants; I am beholding such faces among them as can make the mountains move from their spots if they pray to God. So beware! Never try to contest with them, otherwise you will perish and the entire nation of Christians will succumb to extinction!"

By that great event, Imam Ali Ibnu Abi Taleb (peace be upon them) has been counted as the 'self ' as Imam Ali has no place in the verse unless he is included in the word "ourselves." Bringing Imam Ali with him indicates that the Messenger of God considered Imam Ali an extension of his personality. By considering him so, he elevated him above all the Muslims. The Messenger said on many occasions: "Ali is from me and I am from him, and no one represents me but Ali."

{..and our women..} of the holy verse as stated by the saint Prophet: "Those amongst women who represent the nearest position to my humanistic and spiritual affiliation in my life, and here I put forward my daughter Fatimah, the Doyenne of the Women of the World, who is 'part of me' and 'Allah becomes angry for her anger and satisfied for her satisfaction' in this great challenge so as to prove that I am absolutely sure about the truth of my call, for man does not put forward his most beloved people to the places of danger unless he is certain of safety."

A dialogue between the Imam Ali Ar-Reda (peace be upon him) and Al-Ma-Moon (Abbasid caliph) went as follows: Al-Ma-Moon: "What is the evidence on the preference of your grandfather (Ali)?".

The Imam Ar-Reda (peace be upon him): The evidence is the word of God "and ourselves and yourselves." The Imam meant that by bringing the Imam with him in the event of "Mobahalah" the Messenger made him an extension of himself; and whoever is an extension of the personality of the Messenger would be the Imam of the Muslims.

Al-Ma-Moon: This would be true if there is not "our women and your women.".

Al-Ma-Moon meant that it is possible that there were among the Muslims other men who were like Ali in being an extension of the personality of the Holy Prophet but he did not want to bring all of them. He chose to bring one of them Ali as a representative of his equals. The evidence of this is the word "Our women " since this word includes all women who are related to the Holy Prophet by birth or marriage. But the Messenger brought only one of them Fatima who is related to him by birth as a representative of the women who are related to him.

The Imam Ar-Reda (peace be upon him): This would be true if there were not the words: "And our sons and your sons." He meant that Fatima was brought as the unequalled woman rather than a representative of her equals in the family of the Prophet. Had other women been equal to Fatima the Holy Prophet would have brought them with her. For he brought Al-Hassan and Al-Hussayn together because they were equal to each other and did not bring one of them as a representative of his sons. Therefore presenting Ali on this occasion is an evidence that Ali is the only one whom the Prophet considered to be an extension of his personality.